In 1990 several Swedes went to Marghita in Romania to help abandoned children. Back in Sweden, the aid organization EFI (Elim Fellowship International) was founded and then a Romanian organization in Marghita was able to be started, which was named FCE (Fundatia Crestina Elim).
EFI hosted a grand 25th anniversary gathering in Sweden on November 7th and the gathering was devided into three sessions. 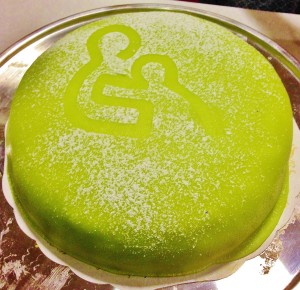 The gathering in Linköping was, as promised, highly interesting and very important for understanding the situation, particularly the Roma people, but also to get to know what has been done and what is possible to do to save more victims.

Hundreds of people came, all with the same common interest to hear more about the activities that touch and engage. Most of those who came are active in EFI/FCE and many have themselves participated in the work in Marghita. During the breaks there was opportunity to meet and converse. The visiting Romanians expressed their delight that so many Romanian-speakers were there.

A team from FCE in Marghita was in attendance after touring southern Sweden where they presented the work in Marghita. They got to meet and thank many supporters. Other heard about FCE´s work for the first time and hopefully there were many who felt the same way as one student who exclaimed, “It went straight to the heart!” 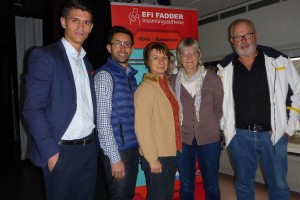 The FCE team consisted of five people. Lars and Barbro Gustavsson went to Marghita 25 years ago and were among those who started EFI in Sweden and FCE in Marghita. Lidia Micula is also one of the founders of FCE, and has been at work from the beginning. Today she is the project manager for Casa Silvia, family homes and foster care placements. Andrei Loghin has been employed in FCE for about five years and he is the project leader of the project Support for poor families and camp activities. He is also responsible for the car wash. Lucian Hebristean is another young employee, and he has worked in FCE for over two years as a project manager for After School. The entire team took part in the session where they got to talk about what is going on in Marghita and it was clear that all are passionate about what they do. 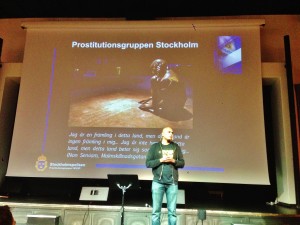 In the next session Simon Häggström spoke. He is head of the Stockholm police prostitution team and spoke about the history of prostitution and the shocking situation of women who are exploited in prostitution as well as police action to stop the perpetrators. Many of the women come from poor conditions in Romania.

Anna and Josephine from Stockholm, run the organization Talita and spoke about their work which helps vulnerable young women, who have been abused and forced into prostitution, many of whom are from Romania. The session was opened by Sofia Gustafsson, who after working in FCE since its inception 25 years ago, will start working with Talita in Stockholm. She, Anna and Josephine dream of being able to improve assistance to the Romanian women, who are victims of trafficking, through follow-up in their home country. 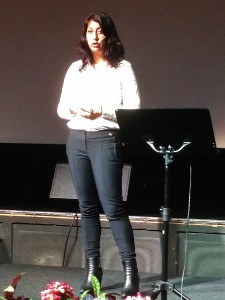 Sara Recabarren is a TV reporter and she told the poignant story of a young disabled Roma boy who grew up in orphanages in Romania and was forced to beg in several countries in Europe. Sara and her reporter team rescued him in Sweden and took him back to Romania where he was offered a safe place at FCE in Marghita. The documentary “Slave in Sweden” highlighted this aid campaign and gave a very positive image of EFI/FCE.

After that, attendees were able to ask questions such as what you as an individual can do to help people who have become victims of prostitution and human trafficking and to prevent it from affecting others. Simon Häggström responded: “Remember that we are the clicks of people who are the richest in the world! Donate money to organizations like Talita and EFI/FCE! ” 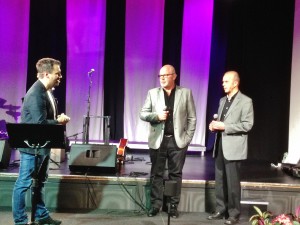 Daniel Zethson, who is chairman of EFI Collection Foundation in Sweden, led the two sessions in the afternoon.

Hans Lundberg and Lars Gustavsson got to explain how it all started 25 years ago and the FCE team and the guests from Stockholm had the opportunity to give brief speeches in the evening. Watermark Media Lab unveiled an information film, which was recently filmed in Marghita.

The simple beginning of work to rescue abandoned children has been developed and given a chance to change lives for many. Sponsors and donors can be sure that aid is delivered and everyone involved can know that it’s meaningful to be involved and make a difference!