During a few days in June, I, together with 11 other people from an anti-trafficking department in Stockholm, Sweden came to visit the work of FCE. The trip was financed by Stockholm City Council. All of us were public sector employees and represented different authorities such as the police, social services, immigration service, prosecution authorities etc.  What we had in common was the fact that we all work with human trafficking. 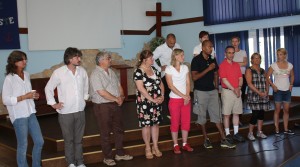 The purpose of the trip was that we have seen an increase in Sweden of people being involved in human trade or trafficking, many of them with Roma background. The most common way we have seen people from Romania being abused is in prostitution and begging. Due to this, a study trip was planned in order to show us the background and social deprivation that so many of these people come from with the goal of making us better in meeting and trying to help those people who get stuck in the hands of traffickers and pimps and taken to Sweden to be abused.

We began the journey with a flight to Budapest where we caught a bus to Oradea where we were going to stay. We hit a problem at the Hungarian – Romanian border when one of the people in the group realised she had an expired passport. It eventually got solved but we did not arrive at the hotel until 04.00.

The following two days included a very intense programme with long days in temperatures  of around +35 degrees! We were able to hear the history of FCE from Lars, Barbro and Sofia. An incredible story! We also got to see the different projects and meet many fantastic people. There are in particular two events that I would like to highlight…

The first one is our visit to the halfway home ‘Brandusa’. We met a bunch of wonderful young people and as we work with human trafficking, we were asked to share with the young people about the risks and how things can turn really bad if you are not careful.  We talked to them about what human trafficking is, how the traffickers recruit their victims, warning signs etc. The response was enormous! These young people had so many questions, they could hardly contain themselves.  It was obvious that this was something that some of them hadcome into contact with. Some of them had personally been offered suspicious jobs or knew of someone who had mysteriously disappeared abroad and no longer knew where he or she was. This gathering closed our first day in Marghita. We really felt that the young people took on board what we told them.

The other event that I would like to share is the visit that we did on day two to a Roma village in the countryside. What we were faced with there is something that I, personally, will never forget and it is hard to describe in words what we saw. There were children without clothes, children without food, children without love, families who lived in a few square metres of soil flooring, no jobs, no health-care, no food, no hope, nothing to live for. I think that many of us, including myself, thought that such conditions can only be found in remote places in the African jungle or somewhere else far, far away! The fact that, in 2013, there are ghettos in a country that is an EU member only a few hours by plane from Sweden became an eye-opener for us all. Many of us are accustomed police men, social workers, prosecutors etc who have seen a lot of misery back in Sweden but we were unable to hold back the tears when we saw this utter misery! 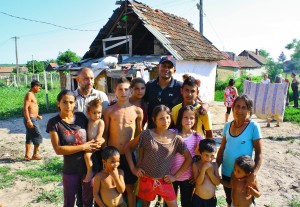 This trip, however, was not merely sorrow and misery. One thing really hit me when meeting the young boys and girls who are part of FCE. In my job I am very used to meeting young Romania girls who have been placed in flats or hotel rooms in Stockholm to sell sex to Swedish men. When meeting these young girls there is an ever present red line of hopelessness, as if the spark is gone.  On this trip I met many young girls and boys, some with a similar background who had been round Europe and been abused in various ways.  One thing that became very apparent was that these young people had got their hope back. In spite of the horrendous trauma they had been through, I was able to see how the young adults had got the spark back in their lives. This is probably the best mark of FCE’s work – that they give hope back to those who before did not have any.

None of us went home untouched.  Sofia, Lars, Barbro and all other workers in Marghita and elsewhere, what you do is incredible! You really have laid down your lives to help those that nobody cares about!

I would like to encourage and challenge you who read this to support FCE – I will certainly do that! I have really seen how every penny reaches all the way to the people who really need it and does not disappear on the way in hidden fees and costs. 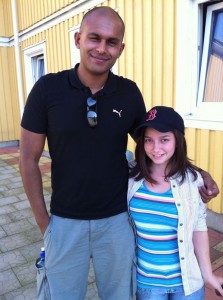