Birgitta Hallenrud came to Marghita for the first time in April and writes about her impressions;

Why do they come here? Why do they choose to travel hundreds of kilometres to sit on the ground outside a supermarket and beg for money? Is there really nothing you can do for them in their home countries instead?

With these questions in the back of my head, my husband and I decided to tag along when a couple from my home town made one of their many journeys to Marghita in the North West of Romania. They, together with a group from another area in Sweden, were going to work as volunteers at a foundation run by FCE in Marghita.

I won’t go into everything that this foundation has accomplished during the years but I just want to mention that there are four family homes for children who otherwise would be orphans, a home for young people with special needs and a ‘transit’ program where young people are prepared to manage on their own in society.

What the short-term volunteers can help with is usually maintenance in any of the many buildings the foundation has.

In this letter I will only focus on some of the experiences and thoughts I had during the week I participated.

One day I was peeling seven kilos of potatoes. A few hours later I saw a woman with her children going through the potato peelings in the big rubbish bin! I was totally shocked but was told that whatever she left, the man who collects the rubbish would probably go through again to see what he could use. I didn’t think it could be like that in Europe today!

Something that made a strong impression on me was the visit to a state run institution some kilometres from the town of Marghita. About 70 people with different kinds of disabilities live there, some with only a physical disability such as an amputated leg, others with major mental problems. The ages seemed to be between 20 – 80yrs and this is where the old beds from an old people’s home in my area of Sweden will end up. I’m sure they will be very useful.

The first impression of the institution was very positive. There was a lovely park to walk around in, the cherry and plum trees were blooming, the birds were singing and a dog was feeding her puppies.
Together with those who wanted to join us, we went into a nice little chapel beautifully equipped according to the orthodox tradition with icons and a picture of Maria. We (the Swedish people) joined in too and sung Romanian worship songs. My husband played his accordion to the great joy of those there and the questions about how he did it were many. My contribution was to play Amazing Grace on a small toy piano filled with sweets which I got from our second hand store in Sweden. (The piano was later left at The Club.)

Then we were able to see some of the rooms which were surprisingly spacious. What didn’t feel as good was that there were far too few staff. Many need help going to the bathroom and one can only imagine how hard that must be. The possibilities for those living there to go outside the institution are also very few. Not many visitors come so those living there don’t get much stimulation from the outside. That made me sad. 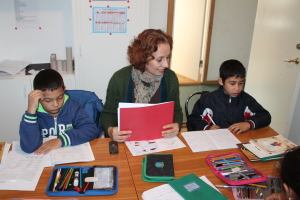 One difficulty I haven’t thought very much about previously is the lack of running water and the problems that come with that. I visited a Roma community of small shacks. There was a poorly build outhouse but I don’t know how far they had to walk to get water. One can read that school is free in Romania and that it’s mandatory for 10 years but if a child is dirty and smells bad, they will soon be bullied by both children and staff and won’t go anymore.

Here FCE has taken, in my opinion, an admirable initiative to start an After School project. The children are picked up before or after school, receive help with the hard homework and at the same time they get their clothes washed and dried. I was impressed walking around, being guided by the 23-year-old engaged project leader. 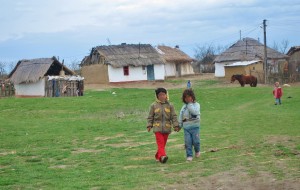 Regarding the poor water supply, I understood that there is money for a project and the knowledge to build for instance a centre with showers and washing machines in such a poor area. The problem is “only” the lack of political desire among those who make the decisions. It is not favourable to put money into helping the poorest if you want to be re-elected. 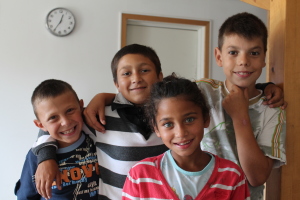 Was it Roma children or other poor children we saw at the After School project? Actually I don’t know and this is where I had to start thinking in a new way.
At FCE, that distinction is not made. The work once started with some people watching abandoned children in hospitals and state run institutions on TV and wanting to do something about it. If they were Roma children or not wasn’t the important factor. The same thing when I sat down playing Ludo at the club in the evening. It wasn’t relevant to ask who was Roma and who was not. FCE has about 50 employed Romanians and it’s the same here – I guess some have a Roma background and other don’t.

The church service on Sunday was special. We went to a Baptist church some kilometres outside of Marghita where there would be a baptism. The service lasted for three hours and I admired the disciplined congregation who calmly listened to at least two sermons. One of those getting baptised, who has special needs, had grown up in one of FCE’s homes, Casa Silvia. Each one of those who were getting baptised had written their own testimony which they read. Silvia was helped to share her testimony and she looked very happy. A woman in a wheelchair was lifted into the water. The whole ceremony was very touching. Many of these people don’t feel welcome in other churches but the atmosphere here was warm and welcoming. 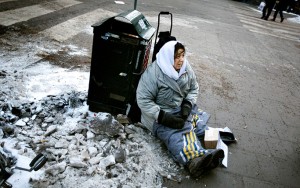 So yes, why do they come and beg outside our supermarkets and what can we do? An unexpected insight is that it is probably not the poorest who come. To be able to leave their country and return, they need to be registered and have an ID-card. In Romania this costs money. Those who are the poorest cannot afford this so they don’t “exist”. The conclusion is that if you want to help those who have the worst conditions, it has to be in their home country. For this to happen, political decisions are needed! In the long run, maybe Swedish politicians can influence Romanian politicians but that is a job that will take a long time.

Just one person will not be able to change everyone’s life but you can do it for someone by supporting organisations like FCE.

To go there for a week or two and try to see with your own eyes is highly recommended!