About eight months ago I had an idea to ask if volunteers were needed in Marghita. I had a six month break from university and felt that I wanted to do some meaningful work. Less than a month later, I was in Marghita on a short visit and was greeted by worn out houses and roads, a whirlwind of projects run by the organisation FCE and Romanian children and adolescents who radiate life, warmth and hunger.

I have now lived and worked as a volunteer in Marghita for about four and a half months and two weeks ago I came back to Sweden.

Now, looking back, I can summarise my impressions from the time in Marghita with the word ”hunger”. Children and young people are hungry for attention, hungry for love and affirmation, hungry for more from life, more of God, yet sometimes, simply for food and clothing. But what really fascinated me more and more the longer time I spent in Romania, is that the children and adolescents that I came there to help have actually given me a lot instead! They have given me so much attention, so much love and affirmation, taught me so much about life and about God and they have given me so many gifts without any hidden motive.

My idea was that I would go to the poor people who were in need to receive, but instead, I was able to meet people who are so much more generous and willing to give than I am. But they are hungry still, and there is still a need for volunteers.

I thank God that he sent me there and now I pray that more people will come. 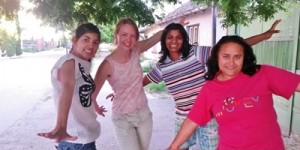